The Best Universities in Texas for Combining Football and Academics

There’s nothing quite like college football in Texas. The atmosphere, the excitement, the rivalries, everything that makes college football exciting is bigger and better in Texas. When you pick a school, you’re likely picking a team to support for life so it’s important to choose wisely. Of course, you’re going to squeeze in a little
Read More 10 States With the Worst Credit Habits

Credit cards offer convenience and some potentially valuable rewards if you’re using them to earn points or miles but it’s easy to get in over your head. According to the Federal Reserve, the typical credit card holder averages 3.7 cards*, while the average Credit Sesame member has slightly more, at 4.6. Approximately 34% of households
Read More How Long Would It Take Residents in Marin County vs. Imperial County to Pay Off $5,000 in Credit Card Debt?

I was reading the newspaper the other day and came across an article about people who face high medical debt, even with insurance. The part that caught my eye was this: [Shields, 60, and her husband] have high incomes and insurance through Medicare, but have still taken on $5,000 in credit card debt. “We don’t
Read More

Student loans have become an inescapable part of life for many college grads these days. Seven in 10 students are financing part or all of their education and the average 20-something leaves school with close to $29,000 in loans. As grads head out to find jobs, student debt clusters tend to pop in areas where
Read More Top 10 States with the Most Credit Card Debt: How Long It Would Take to Pay It Off

The struggle to pay of credit card debt is real. According to Credit Sesame’s internal data, analyzed from a subset of our 7 million members, the average credit card debt a consumer has is about $5,218. It’s not that different than the Federal Reserve’s numbers — it said the average American adult has about $5,440
Read More New Year’s Eve is just around the corner and now’s the time to decide where you’re going to spend it. We decided to round up the ten best places to enjoy the New Year’s Eve festivities that won’t leave you feeling broke once January 1st rolls around. The cities we selected represent the ones that
Read More Buying a home always comes at a price, and in California the cost can vary wildly based on which part of the Golden State you call home. It’s no secret that California residents face a higher cost of living, along with an average credit card debt of $5,040, according to Credit Sesame’s internal data. High
Read More The Most 'Responsible' Red vs. Blue States for Credit Card Debt

In light of the upcoming presidential elections, the Credit Sesame team wanted to see how political affiliation shapes spending and debt habits for the Average Joe. Specifically, we were interested in whether “red” or “blue” states are the most “responsible,” or keep their credit card debts low, when it comes to spending. Drawing from our
Read More 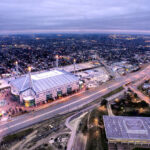 If 2015 hasn’t been the best year, starting over in different surroundings can help you turn things around in the New Year. Packing up and moving to a brand-new city could be a great opportunity to kick your career into high-gear or get over a failed relationship. Once you make up your mind to move,
Read More
« Previous Post Our Team
Next Post » Our Team