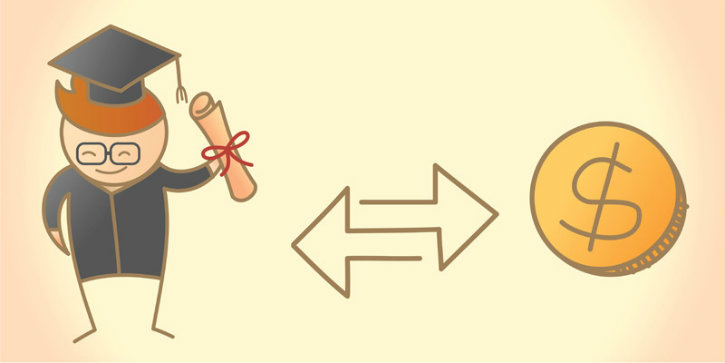 If you were in college some 15 years ago, you’d remember that taking student loans was a pretty common practice. Most students had at least some debt once they had their degrees, but that debt didn’t seem too overwhelming, even if it was a nuisance to repay. The prevailing attitude of this “sandwich” generation now lies in stark contrast to that of the graduates of today.

But this isn’t a story of contrast about “the youth” and their “irresponsibility.” The statistics have shown that this shift in the atmosphere surrounding college debt is more than a generational glitch; it’s an actual problem.

Consider this: in the decade between 2004 and 2014, the percentage of students taking out loans remained relatively constant — 69% in 2014 compared to 65% in 2004. The value of those loans nearly doubled and did so at twice the rate of inflation for the same period of time. As a result, graduates today are twice as burdened by student loan debt as graduates were over 10 years ago. In fact, higher education analyst Mark Kantrowitz estimates that the average 2016 graduate holds over $37,000 worth of loans, a new high.

This figure only tells half the story. The real epic tale of modern college graduates isn’t contained in the principal value of their student loans alone, no matter how much it increases each year. Rather, there’s a second number associated with those loans, and the time it takes to repay them, which serves to compound the true cost burden of a college education: student loan interest.

While the average student loan interest rate — along with all interest rates — has declined dramatically since the early 2000s, most debt-ridden grads might not truly understand the realities of how interest works. Couple that with the sheer amount of time and effort it takes to pay off nearly $40,000 in loans, and you have a recipe for a long-term financial burden.

Each year, the federal student loan interest rate is set by Congress. These rates are fixed and not based on your credit score or past history. This means everyone gets the same rate and that the rate doesn’t change throughout the life of your loan. Rates do vary according to which type of federal student loan(s) you take.


In contrast, loan rates only a decade ago, in 2006, were much higher: 6.8% for Direct Subsidized and Unsubsidized loans, for both undergraduates and graduate students. This means that, all things considered equal, students from the earlier part of the 21st century paid more to borrow money than you do today.

According to data from Navient, one of the largest federal loan servicers on the market, the average student has a total of $26,830 in federal student loans. Given the statistics for the Class of 2016 provided by Kantrowitz, that then means that those same students may also hold over $10,000 in private student loans in addition to those fixed-rate federal options.

Whether from loan giant Sallie Mae, your own private bank or online student lenders like SoFi or Discover, these loans follow a different structure when it comes to interest. Instead, rates are not set, but determined on a person-by-person basis in the same way as they are for a personal loan or mortgage loan. Lenders consider your credit score, past history, current income (if applicable) and other factors to set your interest rate. Many students looking for private loans, particularly young ones fresh out of high school without much of a credit history, therefore opt to have a parent or other older adult act as a cosigner on these loans. If you have a strong credit score, it can substantially lower those interest rates.

Understanding Student Loan Interest Rates and How They Work

When it comes to how interest actually works, most students only have a vague notion of the rate as a percentage of the total loan. Interest rates are not flat things, and paying 5% interest on a $10,000 loan doesn’t mean repaying $10,500 unless you pay back the loan within a set (and very short) time period. Instead, interest is compounded, meaning that every calculation is based on a new total, which includes the principal plus any already-accrued interest. Compounding can take place daily, weekly, monthly or yearly, but it means that your payments are higher the longer you take to repay the loan — not only is more interest added, but the compounded principal is also greater each term.

For this reason, it’s important to pay attention to more than just a principal-rate analysis when taking out a student loan. In addition, you and your family need to be aware of other ways that payments and totals can add up over time.

Capitalized Interest and the Grace Period

All student loans, whether public or private, begin to accrue interest from they day they’re disbursed. Because the federal government allows you to defer payment of your student loans for up to 6 months after you graduate, leave school or drop to part-time status, it’s easy to forget about the burden of your student debt. Your debt doesn’t forget you, though. Instead, student loans accumulate what’s known as capitalized interest, or interest generated before repayment commences.

The one exception is Direct Subsidized Stafford loans, which are only available to undergraduate students. These loans also accrue interest from disbursement. The government pays the interest for you — subsidizing it — until the Grace Period ends.

For all other student loans, the capitalized interest is added to the principal amount at the end of the Grace Period. It’s this amount, not the amount you received from your loan, which lenders use to calculate your interest rate for the first period of repayment, therefore increasing interest accrued for that period and upping your payments much more than you might realize.

While all federal student loans carry a fixed interest rate, meaning the rate is set when the loan is disbursed and doesn’t change throughout the life of the loan, many private loans offer a variable option that could lower your interest rates if you’re a qualified borrower. Understanding the way variable interest rates work is key to determining if these types of loans are right for you.

What Is Variable Interest?

As their name implies, with a variable interest rate student loan, your interest rate can also rise or fall dramatically due to what are known as index changes. Rather than set the rates randomly, lenders use different pricing indices based on market conditions to determine interest rates at any given time. This includes fixed and variable interest rates; the only difference is that variable rates change along with these indices on a quarterly basis. The indices used by banks for determining interest rates include LIBOR (the most common), Bond Buyer’s, FNMA and Call Money.

How Is Variable Interest Determined?

As rate indices change, your variable interest rate also changes through a formula unique to each lender and its practices. In general, the lender adds the index rate to a predetermined, personal number called a “margin.” The margin, which is established based on a proprietary formula that also varies from lender to lender, is set when you take out your loan. It’s based on the lender’s risk evaluation of you or what it sees as your ability and likeness to repay the loan — factors such as your credit score and history are used to determine this number.

If you took out a fixed rate student loan, the only way to change that interest rate is through refinancing. The process essentially boils down to this: you take out a new loan to pay off your old loan (or loans) and then repay that new loan instead. Refinancing is only available through private lenders — the federal government just allows students to consolidate their loans into one payment — and therefore comes with all the risks and rewards of choosing a private student loan.

For many struggling graduates, refinancing is a viable option that allows them to reduce their monthly payments and save month over month on interest. Beware that, if part of your refinance agreement extends the time it can take to pay off your loans in full, you may end up paying the same, or more, because of that tricky compound interest. Therefore, it’s vital to look not only at monthly payments but also at the total you pay over the life of the loan to truly understand how good a refinancing deal you have.

Taking student loans, whether federal, private or both, is often the only way that most students can access a college education in the United States today. While, over time, the benefits of that education and increased income certainly add up, when it comes time to pay off your student loans, that can hardly seem the case. As college tuition rates continue to climb and more and more students are straddled with post-graduation debt, paying attention to all aspects of your loan agreement, including the implications of interest, is critical for your financial health now and in the future.

You can trust that we maintain strict editorial integrity in our writing and assessments; however, we receive compensation when you click on links to products from our partners and get approved.
Published September 9, 2016

Andrea Ditter-Middleton is a freelance writer based in New York's Hudson Valley. Also filling her days as a wife, mother, English teacher and all-around renaissance woman, when not at her computer you can find Andrea outdoors with her family or curled up inside with a good book and cup of coffee - likely asleep.
View Andrea Ritter-Middleton's posts and answers >
Related Links
Is now a good time to buy a new car?
Did Great Lakes tank your credit score? Here’s how to fix it.
Loan Forbearance vs. Deferment – What’s the Difference?