Are Independent Voters the Most Creditworthy? 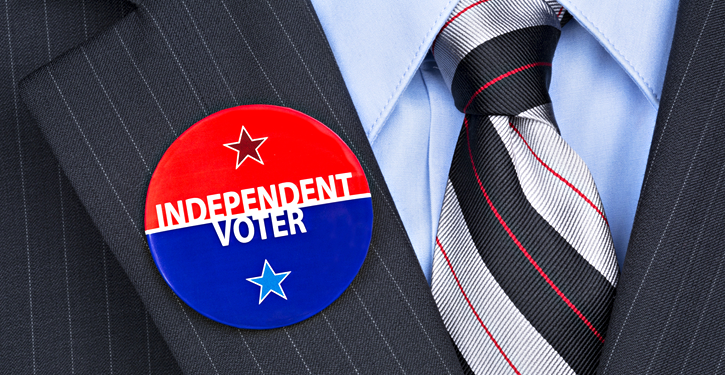 As the leaves change colors and drift away this November, Americans across the country will be head to the polls to choose the next President of the United States. This election is very different from the last few: support for the two major party candidates is at its lowest point in twenty years[1].

More and more people, especially young white Millennials[2], are distancing themselves from our country’s two major parties and calling themselves Independents. Because Independents are so numerous, they’re poised to determine the outcome of the 2016 Presidential election[3].

At the same time, many people who identify as “Independents” (those who don’t affiliate with a political party) still tend to vote for one party over the other[4]. Therefore, this group is made up of people from all across the political spectrum, each with their own set of ideologies, economic conditions, and financial habits.

We wondered: how do the credit habits of Independent voters compare to party-specific voters? We polled a sample of Credit Sesame’s eight million members to find out. In particular, we surveyed 1,600 Credit Sesame members who plan to vote for Donald Trump, Hillary Clinton, those who identify as Independent, and those who do not plan to vote at all.

Among all survey respondents, Independent voters have the highest median credit card debt, at $2,958.

That’s a lot of debt, but when you consider that Independent voters also have the highest median credit card limits ($18,250), they appear to be much more responsible with their credit usage. Independent voters have the lowest overall credit utilization (16%), an important measure of creditworthiness.

Some credit card issuers are more willing to give consumers credit (and higher limits) if they have higher incomes.

They also have the most amount of student loan debt

Independent voters are more likely to have student loan debt than any other group; 43% of respondents currently have one or more student loans.

The median student loan balance of Independent voters is also the highest among all groups, at $38,555.

This makes sense. Independent voters tend to be young people who are still in college or in the beginning stages of their careers—the prime time in life when consumers are most likely to have high balances on student loans.

Independents have the highest mortgage balances

Roughly a quarter of Independent voters currently have a mortgage (26%).

Those mortgages also have the highest balances from all voter groups; the median mortgage balance is $192,756.

Like with student loans, this makes sense if Independent voters tend to be a younger crowd. These people may be in the beginning years of a 30-year mortgage, which means they haven’t have had time to significantly pay down the principle.

Republicans, who tend to be an older group and who have presumably had more time to pay down their loans, come in second at $169,169.

How about their credit scores?

The reasons Independent voters can carry the most debt of all groups and still come out ahead in the credit score race are simple: (a) they use their credit responsibly, and (b) their tendency to be on the younger side means they haven’t had time to experience some of the devastating financial events that can happen in life.

Even though Independents use credit, they use a smaller proportion of their available credit compared with other groups of consumers. Credit utilization is a huge factor that creditors look at to determine your creditworthiness—30% of your FICO® score is based on this number alone. (VantageScore gives similar weight to credit score factors but does not publish the exact breakdown.)

Did You Know? A diverse credit mix is viewed positively by potential lenders, because it shows that the consumer can manage a variety of types of debt.

In fact, credit mix makes up 10% of your credit score, so Independent voters pull ahead in this category as well. One area where Independent voters likely don’t have an advantage over other voters is the age of their credit files. File age makes up 15% of your credit score. We don’t know how old Credit Sesame members are, but given that Independents tend to be younger in general, that would be reflected in their average file age and the age of their oldest account. However, given that they’re so far ahead in terms of credit utilization rates and credit mix, it doesn’t seem like they’re badly hampered by falling short in this area.

How Do Nonvoters Stack Up?

One voting group is even larger than Independent voters: nonvoters. For nearly the past 100 years, roughly 40% of the U.S. population doesn’t vote in presidential elections[5].

According to the Pew Research Center, nonvoters tend to be younger, less educated and generally low-income earners[6]. Although we did receive fewer responses from nonvoters than any other group, we noticed some trends.

In general, nonvoters tended to shy away from taking on debt, perhaps because they’re wary of debt, or maybe because they their incomes are too low to qualify for the higher debt loads that other voter groups carry.

We do know that nonvoters are the least likely to use credit than any other voting group—nearly one in five nonvoters doesn’t even have a credit card. Of those who do have a credit card, the $7,500 average credit limit is the lowest of any voter group. This tends to support the idea that perhaps their incomes are too low to qualify for much debt, like mortgages.

You can trust that we maintain strict editorial integrity in our writing and assessments; however, we receive compensation when you click on links to products from our partners and get approved.
Published October 26, 2016 • Updated: November 2, 2016

View Lindsay VanSomeren's posts and answers >
Related Links
Teaching your kids about finances
Prevent the “Holiday Hangover” with these 5 tips
Trick or Treat! Find out which credit offers are tricks, and which ones are treats