How a CD Can Help You Save Money: What You Need to Know to Get Started 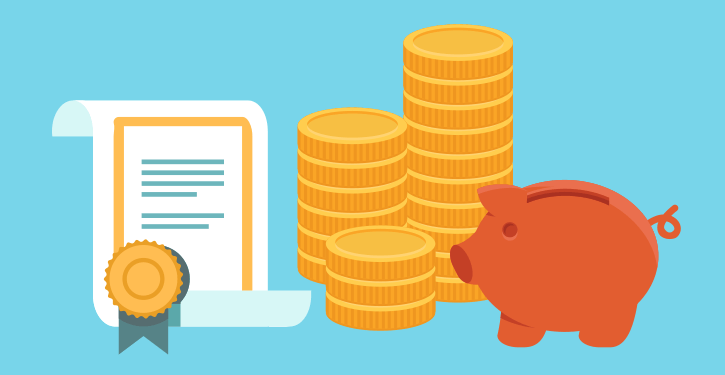 If so, then a certificate of deposit (CD) might be a good option. CDs are a great way to earn more than you would on a traditional savings account. The return is guaranteed. They are especially useful for consumers saving toward short-term goals like the down payment on a home.

Most people think of banks and credit unions as places to get loans. They also pay interest on savings, and offer different rates on different savings products. CD stands for Certificate of Deposit, although Commitment of Dollars might be a more sensible acronym. The interest you can earn on a CD is usually higher than the interest you would earn on the same amount of money in a traditional savings account.

CDs have a specified term, or length of time that the investment lasts. Terms can range from a few months to several years. During this time, if you withdraw funds you will probably pay a penalty, usually a set fee and/or a portion of interest. If your investment hasn’t earned enough to cover the penalty, the remainder could be deducted from the original amount you invested. CDs work best, therefore, for consumers who can leave the investment alone for the entire term. CDs are great for consumers who don’t want to risk losses because they’re one of the safest investments you can make, assuming you invest in an FDIC or NCUA insured institution. Banks and credit unions are insured through the FDIC or the NCUA, respectively, up to $250,000 per depositor.

The interest you earn on a CD is measured by the Annual Percentage Yield (or APY) and varies for each CD. Generally, long-term CDs pay a higher rate than short-term CDs. Interest is compounded, which means that earned interest is added to your balance and interest is then earned on the new, higher balance. On most CDs, this happens daily.

At the end of the term the CD matures and your money, with interest, is returned to you. The interest is taxable income, so you’ll receive a statement at the end of the year for tax reporting.

Here are some of the more common types of CDs.

A traditional CD is usually offered by a bank or credit union, comes with penalty fees for early withdrawal, and pays higher interest rates for longer terms.

Rates on CDs often change. If you have a bump-up CD and market rates go up, you can opt in to the higher rate. You can usually take advantage of this benefit once per term.

The main disadvantage of CDs is that the money is inaccessible for the term of the CD, unless you are willing to pay the penalty. Liquid CDs allow early withdrawal with no penalty. The price you pay for this convenience is a lower interest rate.

If interest rates go down during the term of your CD, the bank could lose money. If you own a callable CD, the bank can return your money to you (with interest) before the term ends. The price the bank pays for this inconvenience to you is a higher interest rate.

Jumbo CDs are for large investments, usually $100,000 or more, and offer a higher interest rate compared to most traditional CDs.

A brokered CD is sold by a brokerage (for example, Fidelity or Charles Schwab). They come with the same deposit insurance offered by the financial institution on other types of accounts (but the consumer must verify that the CD is held by an insured institution). Brokered CDs are traded like bonds by investors who need to sell them before they mature. If interest rates have fallen, you might get a higher price for your more valuable CD. If interest rates have risen, the resale value could be lower than what you originally deposited.

How do you find the best rates for a CD?

If you want to use CDs to save money for a specific purchase, think about when you’ll need the money so you can commit to an appropriate term. The best rates are offered on long-term CDs, but they put your money out of reach longer.
Once you decide on a term, compare two factors: the interest rate (APY) and early withdrawal fees (in case something happens and you do need to pull the money out).

What is a CD ladder?

The basic idea behind the CD ladder strategy is to have multiple long-term CDs that mature at different times so that you will have regular access to cash.

Here’s a step-by-step example of how to do it:

In five years’ time, all of the money is invested in higher rate 5-year CDs, with one maturing each year.

Research the institution that offers the CD to be sure it’s insured, and don’t invest more than $250,000.

If you consider a brokered CD, work with a familiar, reputable broker.

Use Broker Check to verify the credentials and license of any broker you want to work with.

Do work with a financial professional so that you understand your options.Shop around. Your bank probably offers CDs, but you might find better rates somewhere else. The legwork you do now can pay off in the future.

Keep an eye on your CDs as they mature. Many banks will automatically return your money, but some will renew your CD for a new term at the same lengths, which might not fit into your financial plans.

Don’t use CDs as your only investment type. Many CDs earn less than the average rate of inflation. This means that although you earn more money over time than with a regular savings account, your money will still have less buying power in the future. For long-term savings like retirement, diversify your investments. A portion of your money should be invested in assets that are likely to provide a higher return. With higher returns comes greater risk, and in general, the younger you are the more risk you can take.

Don’t store your emergency fund in CDs. Murphy’s Law says that whatever can go wrong will go wrong. At some point, you may need access to your emergency savings, but that access could cost you if you need to make an early withdrawal from a CD.

You can trust that we maintain strict editorial integrity in our writing and assessments; however, we receive compensation when you click on links to products from our partners and get approved.
Published December 8, 2016 • Updated: October 18, 2022

View Lindsay VanSomeren's posts and answers>
Related Links
2023 Interest Rates: How High Could They Go?
11 Money Questions | MoneyCoachVince
Leverage Your Credit: What it Means and How to Do it