Ask the Expert: Are Student Loans Considered Bad Debt? Are They Worth it? 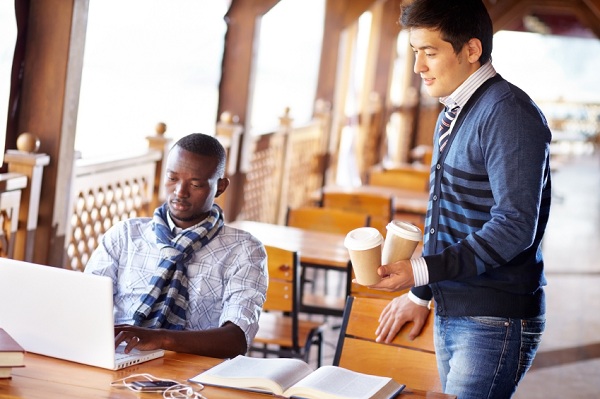 Editor’s Note: The loan offers mentioned in this article are expired and no longer available.

According to the Federal Reserve Bank of New York millions of former college students now share almost $1 trillion dollars of student loan debt, which is at least $200 million dollars more than the aggregate amount of credit card debt we carry as a nation. And, while financing a college education can certainly lead to a more financially rewarding career, the prospect carrying five digits of student loan debt can be overwhelming.

I’ve always made the argument that debt is debt. Still others have argued that you can assign debt to two categories: good debt and bad debt. Student loan debt is what is best described as hybrid debt as it can easily fit into the “good” and “bad” debt categories.

Like a mortgage or auto loan, student loans are installment loans, meaning that you’ll have a fixed payment for a fixed period of time. This is important because credit scoring systems are very forgiving of well managed installment loan debt. Historically, installment loans have less of a chance of defaulting as other types of debt. As a result, you can actually have a very large amount of installment debt and still have elite level credit scores.

Student loans are also meant to fund an education. While college tuition, and student loan debt, has risen significantly over the past 20 years, there really is no argument that a college degree opens employment and earning opportunities.

Finally, in most cases the interest you pay on your student loans is tax deductible. Plus, those interest rates are usually very low. So at the very least you’re getting some amount of taxable income offset by carrying student loan debt. You can’t say that about credit card debt or auto loan debt.

While the argument for “good debt” is pretty compelling, so is the argument that student loans are “bad” debt. First: Even if you fail to graduate from college you are still responsible for paying back your student loans.

Finally, it’s very easy to get into large amounts of student loan debt. The CARD Act prevents someone under 21 from getting a credit card, but there is no law preventing an 18 year old from getting into student loan debt. If an 18 year old isn’t responsible enough to open a credit card, how are they responsible enough to decide that $20,000 per year for the next four years is a smart financial decision?

Thanks to the increasing cost of college, students who can’t cover their tuition bills with federal loans alone have little choice but to reach for private student loans – and those can be prohibitively expensive.

While federal student loan rates are pegged to the 91-day Treasury bill (and are currently at 6.8% for Stafford loans and 7.9% for PLUS loans), private student loans are priced on the applicant’s credit score. (And since most college kids can’t qualify for private student loans based on their credit alone, they have to bring their parents in as co-signers.)

Private student loan interest rates can go into the double-digits, as they are pegged to the LIBOR plus a margin that can be as high as 14.25%, according to Finaid.org. Borrowers whose credit scores would only qualify them for the highest private student loan rates should think long and hard about a future of repaying a debt that might essentially be more expensive than their credit card debt… and the fact that, unlike credit card debt, student loans cannot be discharged in bankruptcy.

Which brings us back to the question: Is taking on all that debt worth it?

Whether student loans are “worth it” mostly depends on how you answer one question: Will you be able to earn enough after college to pay these loans off quickly? The simplest rule of thumb here is that the total amount of student loans you borrow should not exceed your expected annual starting salary. If you plan to be an elementary school teacher, with a median starting salary of $32,400 a year, according to Payscale.com, borrowing $80,000 for four years of college would make no financial sense.

As you see from the example above, what you major in (and the field of work you go into after graduation) play a major role in your financial future. While your interests might lie in Renaissance art and urban sociology, these majors don’t pay the big bucks, especially not at first. Most of the best-paying college majors are in engineering, hard sciences, computer sciences, mathematics and business, according to PayScale’s 2011 – 2012 College Salary report.

Alternatives to the Student Loan Trap

Amassing a mountain of student loan debt isn’t the only choice for those who want to expand their personal and professional horizons.

Community colleges allow you the opportunity to get general education requirements out of the way for cheap or learn about subjects of interest without breaking the bank. Spending two years at a community college before transferring to a four-year university can save you tens of thousands of dollars.

Technical and career colleges offer specialized career training, often a surer path to employment than a traditional-four year college education. While certain technical careers are on the wane (machining, for example), others are growing (computer-aided drafting and design) while others need a constant infusion of fresh blood (welding). And the health care field, singled out as the fastest-growing sector of the economy by the Department of Labor, offers a wide variety of jobs, from those requiring one-year certificates or two-year associates’ degrees, to those requiring advanced medical degrees.

Apprenticeships provide on-the-job training and wages, rather than a steady accrual of debt. Nearly all apprenticeships are in manual and technical trades, yes some of those trades, such as iron worker, operating engineer and HVAC technician, offer impressive wages and opportunities.

With careful financial planning and assessment of life goals, you can decide if a college education is right for you — and how to pay for it.

But what if you’ve already taken out student loans?

According to the Institute for College Access & Success’ Project on Student Debt, the average college graduate is carrying around $29,400 in student loan debt. Of those student loans, almost 12 percent of them are 90 days or more past due, according to the Federal Reserve Bank of New York, which is more than any other kind of household credit.

It’s no question that student borrowers need help with student loan debt, but is refinancing the answer? Possibly.

Refinancing a student loan is similar to refinancing a home loan: The better your credit and credit score, the greater the chance you have for landing a lower interest rate.

Consequently, refinancing isn’t for everyone. If your credit is poor, it’s unlikely that you’ll qualify for a refi — or if you do, you certainly won’t get a better interest rate than what you may have currently. In which case, it’s best to stick with the loan terms that you already have.

If you have good credit, however, you only want to consider refinancing your student loans if your interest rate is going to decrease. After all, it is possible to reduce your monthly payment simply by extending the length of your loan (in which case, your interest rate could remain the same or even be higher), but that would end up costing you more in the long term.

A word of warning when refinancing your student loan: Make sure you consider the protections you might be giving up by refinancing. If you refinance a federal loan, you’re turning it into a private loan, which means that you lose the ability to qualify for an Income-Based Repayment Plan or have the loan forgiven through the Public Service Loan Forgiveness Program. Additionally, it’s important to note that most federal loans have a fixed interest rate that won’t change during the lifespan of the loan, whereas a private loan often has a variable rate, which could increase at some point in the future.

If you’re looking to refinance a private student loan, be aware that only a few lenders offer this service. Back in January, RBS Citizens Financial Group (which runs Citizens and Charter One banks) introduced the Education Refinance Loan. This refi is fee free for borrowers, has a fixed interest rate as low as 4.74 percent (the variable rate starts at 2.9 percent) and you don’t need to be a customer of either bank to apply. While this sounds like a good deal, there’s a catch. Only borrowers with a private loan are eligible. (Those who don’t qualify include those with Direct loans or Perkins loans.) SoFi, a financial company that focuses on student loans, will refinance both federal and private loans, and national bank Wells Fargo also offers a refinance option with their Private Consolidation Loan.

You can trust that we maintain strict editorial integrity in our writing and assessments; however, we receive compensation when you click on links to products from our partners and get approved.
Published July 9, 2013 • Updated: July 20, 2018

John Ulzheimer, Credit Expert for Credit Sesame, is a nationally recognized expert on credit reporting, credit scoring and identity theft. He is twice FCRA certified by the credit industry’s trade association and has been an expert witness in over 170 credit related cases to date. Since 2004 John has been interviewed and published over 3,000 times on the topics of personal finance and consumer credit.
View John Ulzheimer's posts and answers>
Related Links
Banks Change Rules Around Overdraft Fees: What That Means for Consumers
Is Buy Now Pay Later Right for You?
Consumer Credit Defaults Could Push Interest Rates Higher