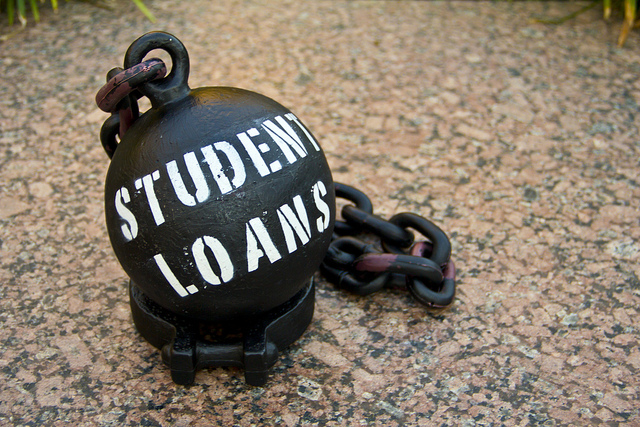 (Image by Andrew Bossi, via Flickr.com)

The Occupy Wall Street movement is a scattered and diverse group. The protests rarely have unified demands in a given city, let alone across the country. However, in talking to the media, many Occupiers bring up one complaint again and again: student loan debt.

Student loan debt is quickly becoming a defining issue of a generation. The Project on Student Debt has collected some harrowing figures on the subject:

– 67 percent of all graduating seniors have some student debt.

– This jumps to 72 percent for private nonprofits and a whopping 96 percent for for-profit universities.

– Perhaps most troubling is the fact that those with Pell Grants — a program designed to make higher education more accessible to low-income students — have nearly $2,000 more in average student debt than their counterparts.

Student loan debt is a serious financial problem and one that is on the grow. FinAid.org reports that the total amount of outstanding student debt currently exceeds all credit card debt in the United States today and is expected to exceed $1 trillion this year. Further, a College Board study found that over half of all students who attended a for-profit university had student debt levels of $30,000 or more, with about one in four students who attended private nonprofit universities having similar debt levels. By contrast, only 12 percent of all those who went to public universities had more than $30,000 in debt.

It isn’t just student loan debt that’s on the rise — defaults are also on the rise. According to the U.S. Department of Education, student loan defaults increased to 8.8 percent in 2009 from 7.0 percent the year before. This was before the recession really hit its crest. Student loan debt is unlike all other forms of debt. Once a student gets student loan debt, they basically have two options: Pay it off or die with it. While it’s technically possible to discharge student loans in bankruptcy court, it is incredibly rare. Defaulting on student loans carries dire consequences. In addition to a damaged credit report card, those who default can have wages garnished and be denied future loans for education.

Fewer things are more radicalizing than shattered expectations. While cynicism regarding graduation is almost a cliché now, a college education has long since been touted as a means for upward economic and social mobility in the United States. One doesn’t have to be a hardcore class warrior to recognize that, regardless of intentions, recent college graduates have been sold a false bill of goods. While certain college majors such as health care, education and agriculture have low unemployment rates and others, such as engineering, economics and hard sciences have high immediate earnings, for the most part college graduates face a very bleak landscape indeed. Thus, it isn’t surprising that Americans, particularly young people have taken to the streets in protest. It becomes harder and harder to dream of a future better than the life their parents had. Further, as the number of Americans entering poverty continues to increase, there is very little recourse left other than taking to the streets.

You can trust that we maintain strict editorial integrity in our writing and assessments; however, we receive compensation when you click on links to products from our partners and get approved.
Published January 31, 2012 • Updated: April 13, 2016

Nicholas Pell is a freelance personal finance writer based out of Hollywood, California. In addition to Credit Sesame, he also writes for Mint Life, Wise Bread and Business Insider, specializing in showing people how to live large on a modest budget and get out of debt. He has also reported extensively on the mortgage crisis, student debt bubble and health care in the United States. Pell lives a stone's throw from the final resting place of Cecil B. DeMille.
View Nicholas Pell's posts and answers >
Related Links
COVID-19 is causing you more debt? Then try these 5 tips to manage your finances during a pandemic
Recent Questions From Our Live Twitter Q&A
Utilities, Cell Phone and Cable Companies That are Offering Help