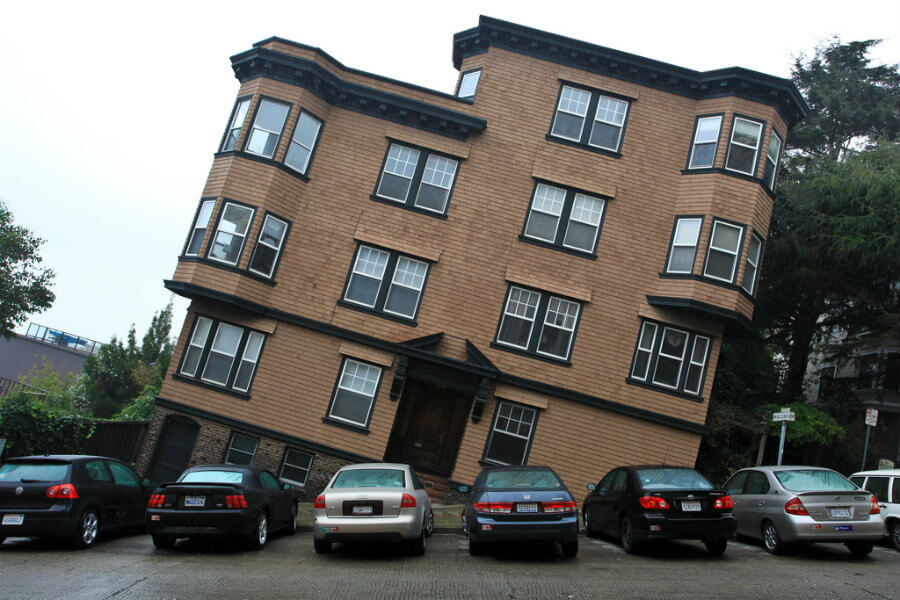 This is from the Russian Hill neighborhood of San Francisco. Image Source: http://bit.ly/1PJlpYL

There are a lot of words you can use to describe San Francisco — scenic, eclectic, hipster-friendly, but unfortunately, cheap isn’t one of them. The Golden Gate City has a crazy high cost of living but it doesn’t keep thousands of newcomers from flocking here each year.

Part of what makes the city so expensive is its uber-competitive housing market. Renters are shelling out an insane amount of cash every month and you could easily buy a small private island for less than what you’ll pay for a house here. When you add in student loans and credit cards, it’s no surprise that San Franciscans are lugging around some serious debt.

How does SF stack up to the rest of the nation?

To put San Francisco’s debt in perspective, here’s some background on how much debt Americans are carrying in general. According to the Census Bureau, the average mortgage debt comes to $117,000. Credit card debt totals around $3,500 on average. As far as student loans go, the Institute for College Access and Success puts the national average student debt total at $28,400.

When you look at the numbers for San Francisco, it’s clear that residents here have a much bigger debt pile to dig their way out of. So why is that? The housing market is a big part of it. There’s only so much real estate available here which means homes are priced at a premium.

SF’s hourly wages are high, but so is cost of living

San Francisco residents earn an hourly wage that’s 47% higher than the national average, according to the Bureau of Labor Statistics, but the overall cost of living is higher so those extra dollars don’t go as far. When you’re got less disposable income to work with, it might be necessary to turn to a credit card to fill the gap.

As far as why the student loan burden is so much higher, it all goes back to San Francisco’s job market. It’s become a haven for grads who are trying to get in on the ground floor of the tech industry. Unfortunately, those college degrees they’ve worked so hard for are carrying some pretty big price tags.

We decided to analyze the city’s most desirable areas to see just how badly residents are bogged down by bills. The ZIP code research was derived from Credit Sesame’s own database of those who reside in the San Francisco area.

Take a look at how much of a financial pain it really is to live in San Francisco’s hottest neighborhoods. 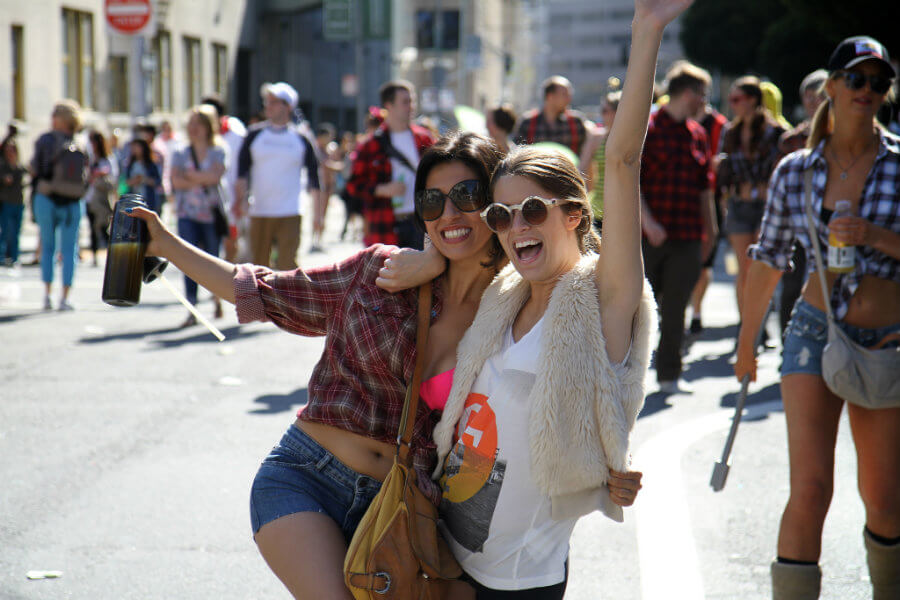 If there’s a festival or cultural event of any kind going on, chances are it’s happening in Civic Center. This neighborhood tends to get mixed reviews because of how close it is to the Tenderloin but you’ll find a lot of renters setting up shop here. Civic Center residents are the third most indebted with credit cards, but they have the lowest debt burden overall on our list. 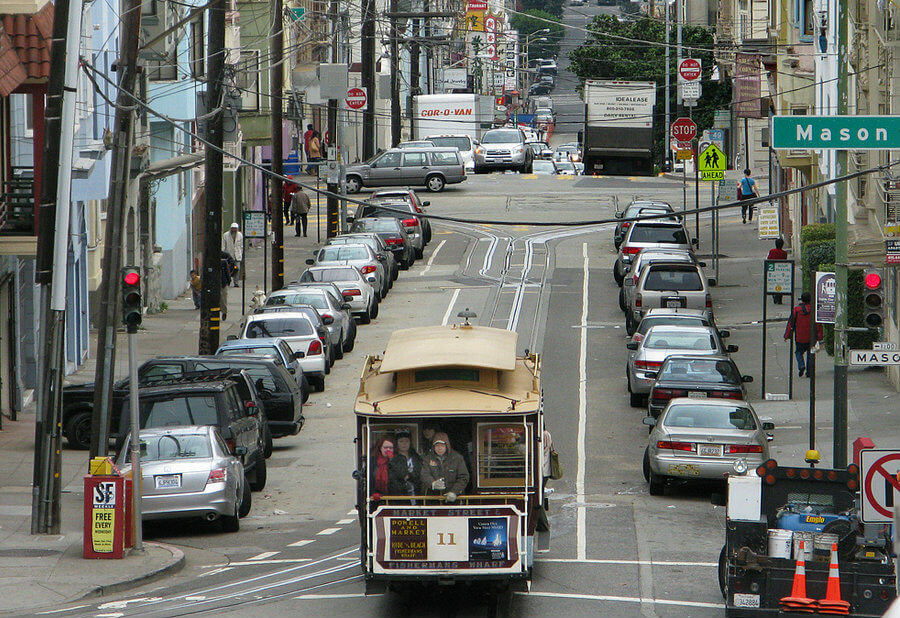 A cable car ride in San Francisco will run you about $7. Image Source: http://bit.ly/1LFsEff

Nob Hill is one of the city’s most historic neighborhoods and it’s got a decidedly swanky, old school feel. It attracts families and young professionals alike, many of whom are dragging along a big pile of student loan debt when they move in. 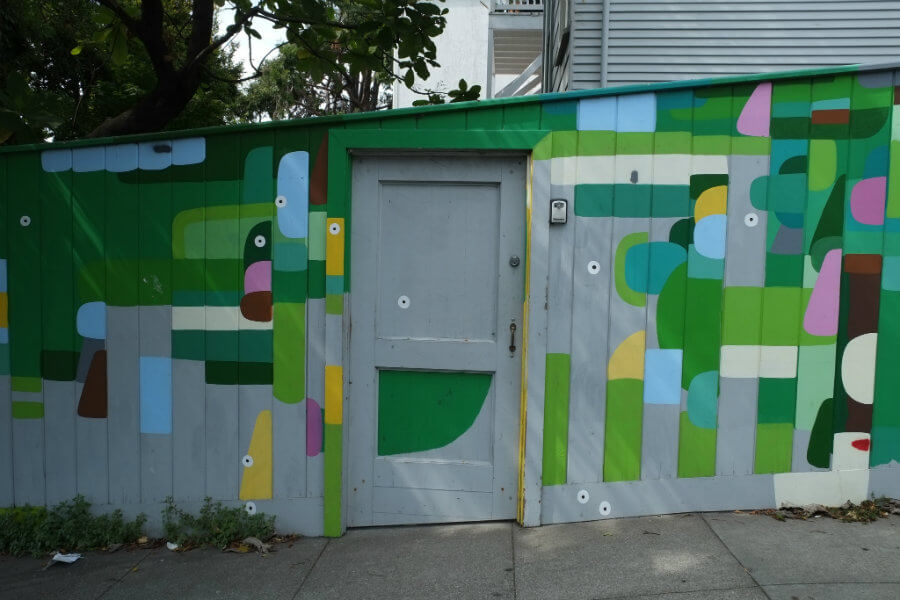 A modest apartment in Potrero Hill will run you about $1.1 million. Image Source: http://bit.ly/1KoJfC1

If you like peace and quiet you’ll find it in abundance in Potrero Hill. Living here is almost like living in your own little bubble apart from the hustle and bustle of the city. Residents still shell out a pretty penny for a home, but they’re not as credit card dependent as the other ZIP codes from our database. 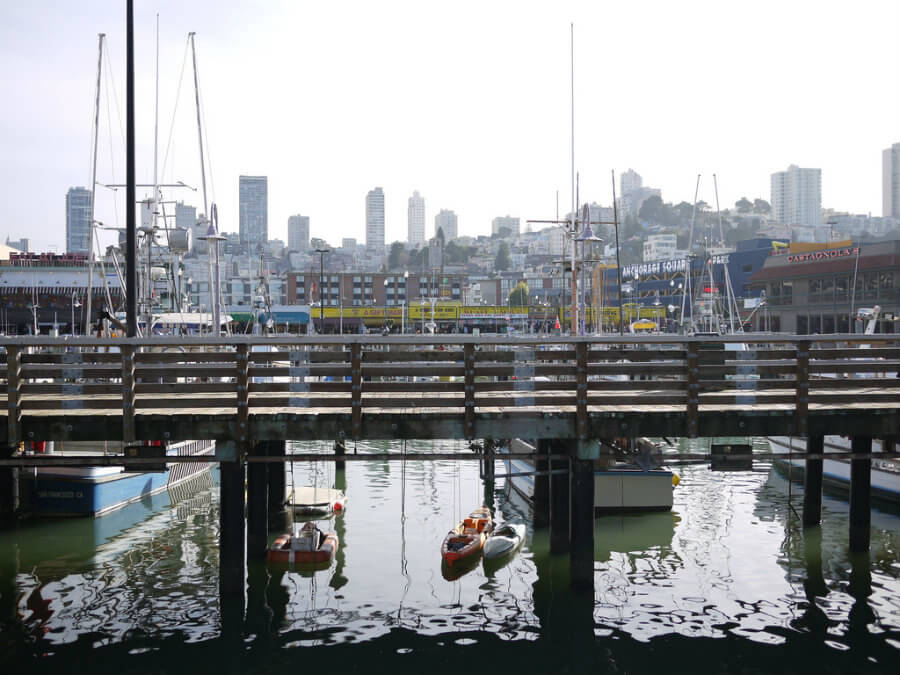 Liveaboard fees typically cost $350 a month, if you want to live in a boat on the Marina. Image Source: http://bit.ly/1LM6ZVZ

The Marina district has become something of a hotspot for millennials and it’s definitely one of the more fashionable neighborhoods around the city. Living on the waterfront does come at a price, however, especially for homeowners who are taking on oversized mortgage loans. 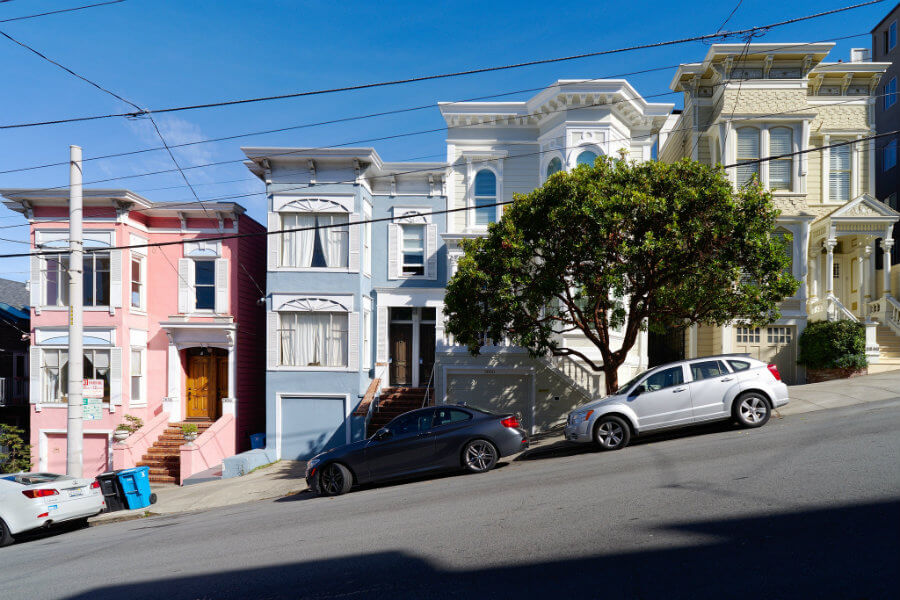 Pacific Heights, also known as Pac Heights, has a reputation for being on the snooty side but it’s big with San Franciscans who need a family-friendly spot to raise kids. Most people from our data own their homes but they’re in hock to the bank to the tune of a half million dollars on average! 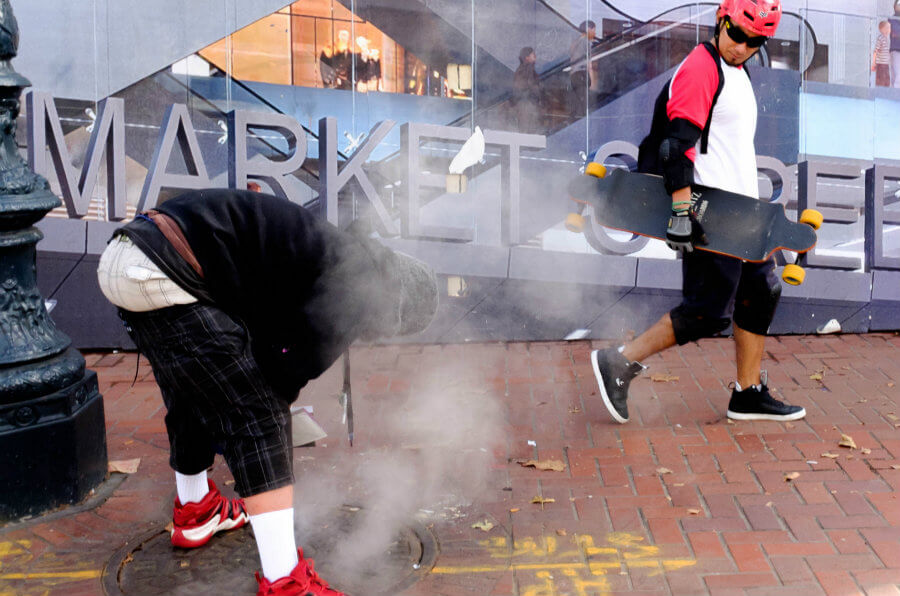 The SOMA district (or South of Market for you out-of-towners) is a mix of young professionals and artsy types, none of whom are strangers to debt. SOMA residents have some of the highest average credit scores of all the ZIP codes we looked at, but they’re also the ones who are leaning the most on credit cards. 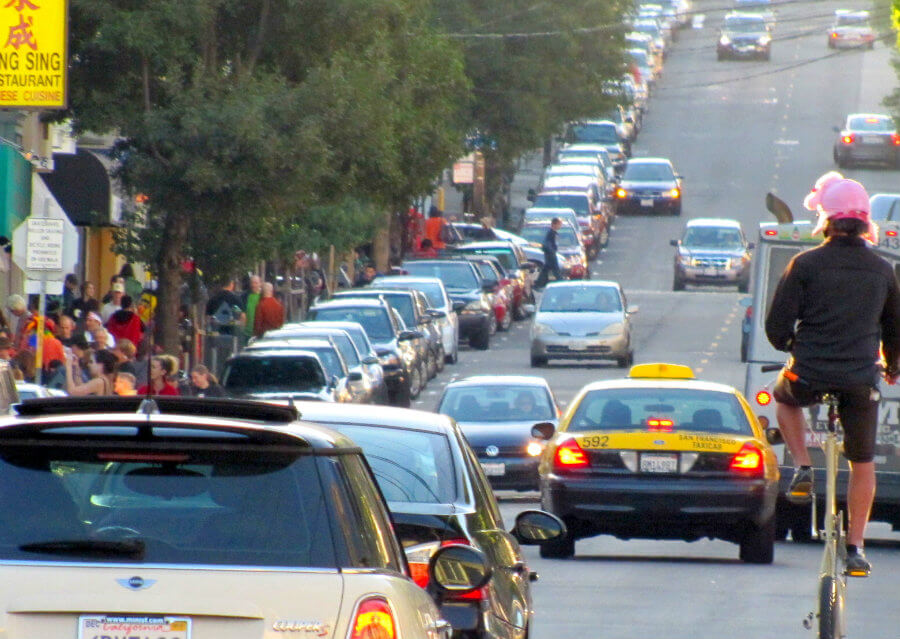 The Castro was one of the first gay neighborhoods in the U.S. Image Source: http://bit.ly/1GiCTJC

Noe Valley and the Castro are like night and day in a lot of ways but there’s one thing they have common — people who live here are swamped in debt. The killer views make up for it, but that’s a small consolation when you’re hundreds of thousands of dollars in the red. 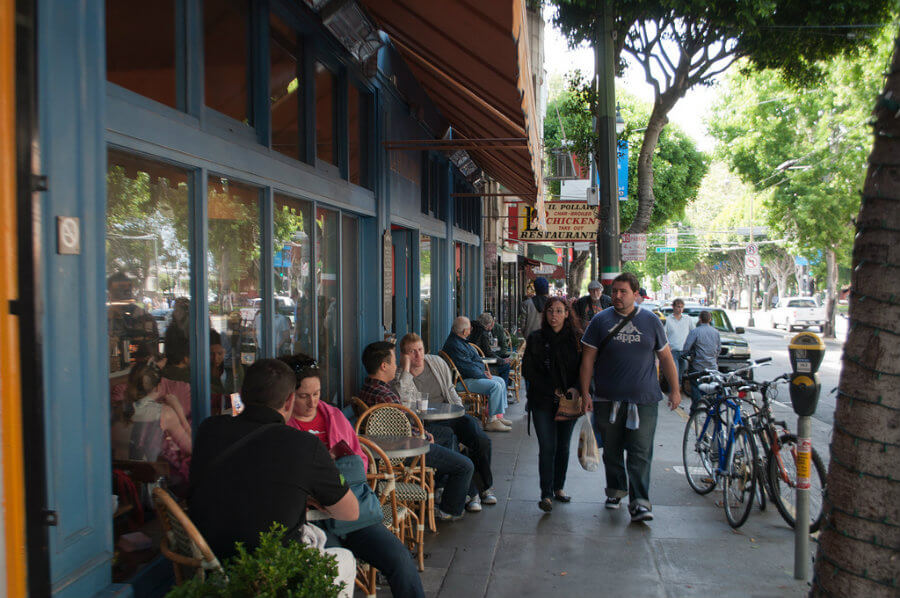 North Beach is #1 on our list for the most debt-ridden ZIP code in SF. Luckily, residents can drown their sorrow in a cocktail, or three, as North Beach is known for its bars and happening nightlife. Image Source: http://bit.ly/1OT3pKO

The North Beach/Chinatown area is great for chowing down on some of the best food in the city or checking out the newest nightclub — if you can afford it. Out of all the ZIP codes in our database for San Francisco, residents here are carrying the biggest student loan burden and a jaw-dropping amount of mortgage debt, earning it the title of San Francisco’s most debt-ridden ZIP code.

To come up with our rankings, we analyzed internal data from our users to get each ZIP code’s average credit score.  We then averaged totals for student loan, credit card and mortgage debt among only those who carried that particular type of debt.

From there, we assigned the individual ZIP codes a numerical score from 1 to 8 in all three debt categories. We then added up each ZIP code’s combined score for the three types of debt. The final score determined each ZIP code’s ranking, with a lower score corresponding to a higher level of debt.

Get Your Free Credit Score!
You can trust that we maintain strict editorial integrity in our writing and assessments; however, we receive compensation when you click on links to products from our partners and get approved.
Published October 21, 2015 • Updated: April 8, 2016

Rebecca is a financial journalist from North Carolina. She has a Bachelors in Political Science from the University of South Carolina. She covers the intersection of public policy and personal finance.
View Rebecca Lake's posts and answers >
Related Links
Cash or Credit—Which should you use?
Forget hoarding toilet paper—these new grocery habits may actually save you money
Worried about your rent or mortgage? Banking executive weighs in on what you should do